National Library of the Republic of Tatarstan / XOPA

National Library of the Republic of Tatarstan / XOPA 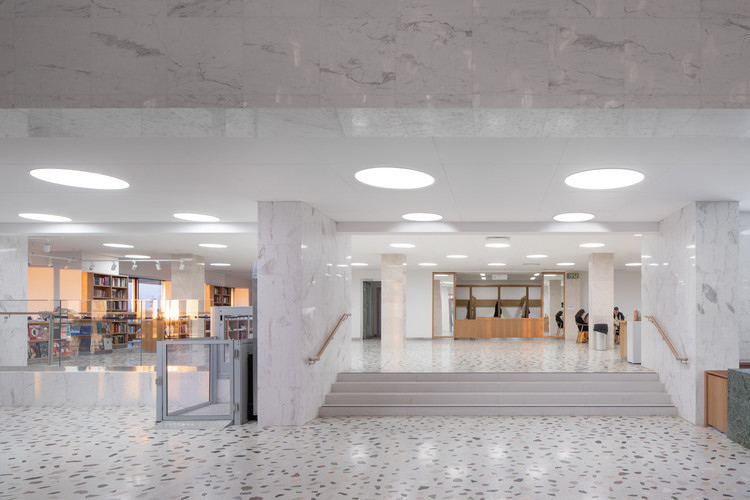 Text description provided by the architects. The National Library of the Republic of Tatarstan is located in a building erected in 1987 for the Kazan branch of the Lenin Central Museum. The building, clad in Armenian tufa thus resembling the image of a waving Soviet flag, is one of the centerpieces of Kazan and a significant example of late Soviet architecture. After the collapse of the USSR, the National Cultural Center “Kazan” was located there, which also housed a museum of the city of Kazan until recently. The most remarkable achievement of the project, while respecting the material and spatial characteristics of the original design, was to transform a dark and antiquated structure into a dynamic and lively public space.

The historical architecture of the Tatars reveals approaches that are quite consistent with the late Soviet “monumentalness” in terms of both the organization of space and the use of materials and color solutions. In keeping with the essence of Tatarstan’s historical architecture and with attention to Soviet heritage, materials are used in their simplest, yet most solemn form.

The double-height central vestibule connects the essential functions of the building and the bank of the Kazanka River to the town square. Thus, the vestibule not only connects the different parts of the building but also the different fragments of the urban fabric surrounding the building. The vertical surfaces of the vestibule are solved with green serpentine, white marble, sandstone and white plaster. The floor is a breach with similarly colored rocks, while the ceiling is finished with visually seamless grained acoustic panels.

To the west of the vestibule, on the ground floor, are the multifunctional spaces of the public library, including reading areas for toddlers, children and teenagers, a computer lab and a music room. This part of the National Library is most notable for being as open and inclusive as possible for all user groups. Its interiors are resolved in a progressive, ascetic and democratic way, using the natural texture of concrete, metal and glass, upholstery in soothing colors and accent lighting.

To the east of the vestibule, on the second floor, are the reading areas of a university library. The architecture of the spaces of the university library pays homage to the Soviet architecture of late modernism. Spatially, compared to the original plan of the museum, the library space inherits a staircase structure composed of three successive levels. These levels effectively house spaces for individual and group study, a catalog area, linear exhibition space, and a notable sculpture – “Anti-War Demonstration” – an artifact of the original design.

The ceiling of this part of the National Library is resolved by an ornamental pattern of tubular skylights and artificial lighting. Floors are warm beige binder epoxy terrazzo filled with brown and gray marble stone aggregate, walls are white plaster, furniture and wall panels are finished in natural oak. In addition to the main library spaces, the National Library building houses a lecture hall, the Whitebox exhibit hall, the Blackbox hall, a recording studio, conference rooms, staff offices and several depots of books.

Tatarstan begins to design the infrastructure of the observation tower — RealnoeVremya.com

A meeting of the Tatarstan office of the United Russia party — RealnoeVremya.com

A “special designer” from the studio of Artemy Lebedev creates a logo for Tatarstan — RealnoeVremya.com